Welcome to a Web site about my writing. 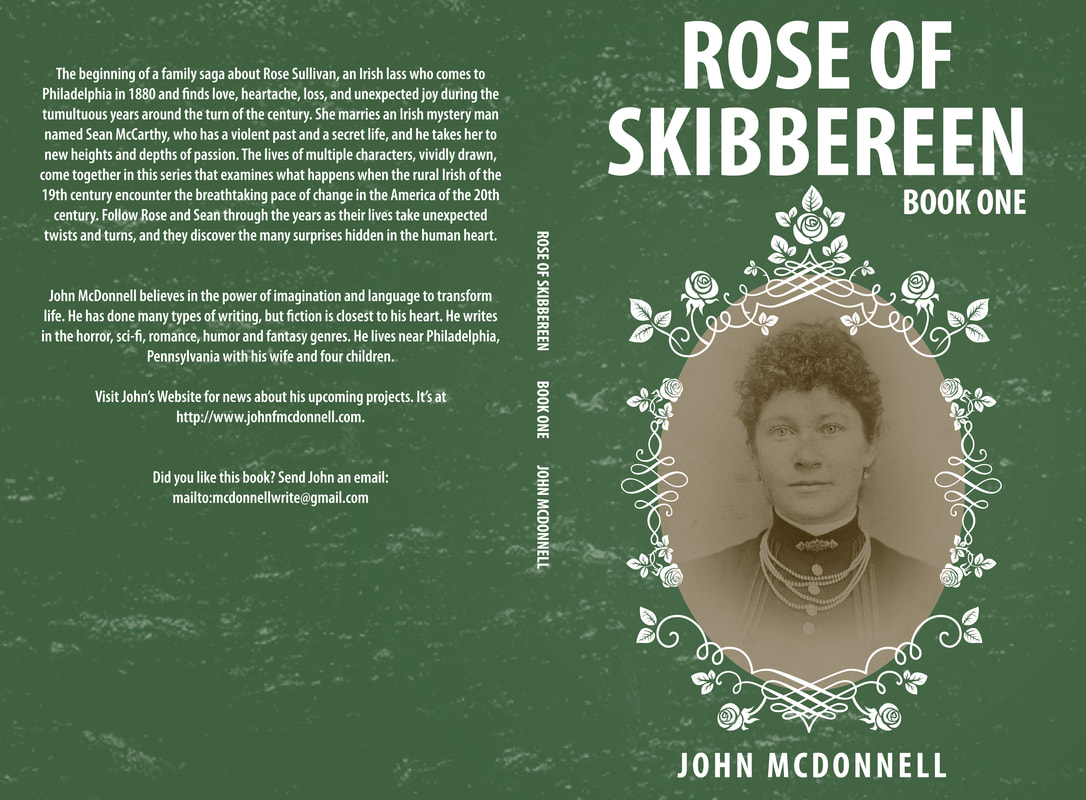 From Chapter One, Book One of Rose Of Skibbereen

“Have you seen him, Rose Sullivan, the fine boy looking at you all this evening?”
“Mary, how could I not?” Rose said, to her cousin Mary. “He’s been staring holes in me all evening with those blazing blue eyes. Why, he’s looking at me like a dog that hasn’t had its dinner.”
They were standing in the middle of a dirt floor in the barn of Fergus Flynn, the only person in the countryside near Skibbereen who had a barn large enough to host a proper American Wake. The place smelled of cows and horses, and it was lit by an oil lamp hanging on the wall and flickering candles placed on the rough wooden tables that had been brought in for the festivities.
The Wake was for Rose and Mary, who were leaving tomorrow morning for America.
“Then why don’t you ask him to dance?” Mary said. “Old McBride is playing God’s own music on the fiddle tonight, and if you don’t ask the boy, I’ll ask him myself. It’s itching my feet are to dance.”
“Wisha, what good would that do,” Rose said, “with me leaving for America at break of day tomorrow? Why, we’ll be on the dock at Queenstown this very time tomorrow evening.”
“No better reason,” Mary said, taking Rose by the arm and guiding her through the groups of dancers to the tall, black-haired boy with the sky blue eyes who was standing in the corner. “We may never come back to dear old Skibbereen, my Rose, and tonight’s the night for dancing the tears away.”
Rose felt a tightening in her throat at Mary’s remark, and the sadness came flooding back. She had been trying not to think too much about the grim fact that she was leaving her home and family tomorrow morning and sailing to America, and that she may not ever see some of the faces in this room again.
No, she must not think of that.
Mary was right. Better to dance the night away than think of that.
She swallowed hard, looked at the boy standing in front of her, and said, “Is it your plan to stand there all night holding up the wall, or will you dance with me?”
He grinned and said, “I’m not much for dancing. It’s more of a singer I am.”
“You wouldn’t take a spin on the floor, then?” Mary said. “It’s her last night in Ireland, and the girl could use a dance to take her mind off her fate. I’m leaving myself, by the way, and if you won’t dance with Rose, would you consider a spin with me?” Mary batted her eyes flirtatiously, but the black-haired boy wasn’t game.
“I told you, I’m not a lad for dancing,” he said. “But if you’ll get your man over there to stop playing his fiddle, I’ll sing you a tune.”
“Maybe we don’t want to hear your singing,” Mary said. “Maybe we want to dance.” The way she was standing with her hands on her hips, Rose knew she was spoiling for either a dance or a fight with this handsome stranger.
“Never mind, Mary,” Rose said. “If it’s a song he wants to sing, let’s hear it.” She turned to where old McBride was sawing away on the fiddle, clapped her hands, and said, “Begging your pardon, Mr. McBride, but the boyo here wants to sing.”
McBride put his bow down, the dancers all stopped in their tracks, and all eyes turned to the black-haired boy, the planes of his face softened by the candlelight, who looked like an angel or perhaps a prince who’d stepped out of a dream.
He glanced around the room, smiled, and launched into “Dear Old Skibbereen”, the  song about the Famine of the 1840s.

Oh father dear, I oft-times hear
You speak of Erin's isle
Her lofty hills, her valleys green,
Her mountains rude and wild
They say she is a lovely land
Wherein a saint might dwell
So why did you abandon her,
The reason to me tell.

His voice was clear and pure, an achingly high tenor that took the breath away. He closed his eyes and sang with such feeling, telling the sad story of a man who had to leave his farm in Skibbereen, that before long the tears were flowing from every eye in the room.

Oh son, I loved my native land
With energy and pride
Till a blight came o'er the praties;
My sheep, my cattle died
My rent and taxes went unpaid,
I could not them redeem
And that's the cruel reason
Why I left old Skibbereen.

And when he finished with:

And you were only two years old
And feeble was your frame
I could not leave you with my friends
For you bore your father's name
I wrapped you in my cóta mór
In the dead of night unseen
I heaved a sigh and bade goodbye
To dear old Skibbereen.

There was a moment’s silence and then everyone clapped and cheered. The boy broke into a grin and gave a bow to them all.
There were cries of “More! Sing another!” but he waved his hand and said, “No, let the fiddler play. It’s a time for happy songs, to dance and sing, when girls like these go off on an adventure. It’s starting a new life they are, and we should be celebrating.”
Rose was about to urge him once more to sing another song, but all of a sudden there was a piercing wail that sent a chill through her, and she turned to see her mother, wrapped in a threadbare black shawl, her white hair askew and her eyes with a wild, unearthly light in them.  She was standing in the middle of the floor, pointing a finger at Rose.

This is an excerpt from Book One of my historical romance series, Rose of Skibbereen. To purchase this ebook, go here.